It is very important to me to encourage Jackson to be open-minded about food. I love to cook and eat a wide variety of foods, and I didn’t want having a young child to change this. However, part of being a parent is realizing that your child has a mind of his/her own, so I have to choose my battles. He was not born loving everything I love, but we at least have him taste everything, because you never know!

I still struggle with getting him to eat enough vegetables. Right now he will eat them if they are well incorporated into a dish (e.g., mixed into a meatball, smoothie, or soup), but there are very few vegetables he will eat on their own.

Kids’ tastes (like our own) change over time. One day Jackson might love something, but the next day he might be totally over it. Here are his “sometimes” favorites (things he has LOVED for at least a little while):

Other healthy foods that he will generally eat:

Things that he is not interested in (but that we still try to feed him every so often):

I’d love to hear any suggestions that your family enjoys!  In the coming weeks I’ll share meals that Jackson likes (that we can eat too!).

Before Jackson, I had no idea what babies ate at different ages, or that there could be so many differing opinions on what/how to feed your baby. There is no one right answer, but here is a summary of how Jackson’s eating has evolved, and what has worked for our family and our little guy.

– Jackson was exclusively breastfed until about six months, when we introduced solids. Whenever we’re together, I nurse him, and when we’re apart, he has pumped breastmilk. I know that a lot of families like to pump an extra bottle so that the baby’s dad can feed the baby in the middle of the night and give mom a break, but I personally preferred a quick middle-of-the-night nursing session to extra pumping!

– At six months, we introduced Jackson to solids. His first foods were baby oatmeal (initial fail) and pureed mango (win). For a while I toyed with the idea of baby-led weaning because I loved the idea of feeding him what we’re eating right away, but ultimately it was more practical for us to follow the traditional spoon-fed pureed baby foods route.

– No matter what we feed him, Jackson looks disgusted after the first bite. He is shocked and appalled by all solid textures and tastes, apparently. When he opens his mouth for more, though, we know he likes it.

– We have tried to introduce him to as many foods as possible early in his life. This is mostly because I want him to be able to eat table food, and the more ingredients he has been exposed to early on, the less we will have to worry when he is eating new foods with lots of different ingredients.

– We feed him a combination of store-bought and homemade baby food. When I make a batch of baby puree, I freeze it in individual portions and then defrost a different flavor each morning as needed. The store-bought bags are convenient, and they are nice way to have him try a new food. I don’t want to spend the time and energy making a huge batch of something that he hates!  I’ve found these silicon trays and tiny glass containers to be perfect for making and storing baby food.

– He loves fruit, as I think most babies do, and likes most of the vegetables that he has tried. He is lucky that his grandpa is an expert fruit picker/purchaser, and introduced him to mangoes and papayas.  He also loves bananas, apples, pears, green beans, carrots, and sweet potatoes.

– He has tried pureed chicken, but is so far not a meat-lover. He tasted plain omelet for the first time over the weekend (the picture below was taken at a diner but the omelet was homemade), and he seemed to really like it. I’m not sure when he’ll be old enough to handle a a pork rib, but I’m sure his dad will give him a taste by next summer!

– At 8 months old, Jackson typically has six to seven liquid meals a day (about 4 oz. each for those that come from a bottle) and two to three solid snacks. His snacks are getting quite large, though!  He may eat anywhere from a couple of tablespoons to almost a cup of food.

As someone who loves cooking and trying new foods, introducing Jackson to solids and new foods has been so much fun. The two of us eat breakfast together every morning, and he is just starting to sit at the table in his high chair and eat while we eat (“eat” = play with a frozen bagel or mash pancake chunks in his hands).  I am super excited for him to be old enough to have favorite meals and to ask me for them!  Carnitas, anyone?

The last seven months have been incredible. Jackson is learning so much, and he seems to reach a new milestone every few weeks.

We took our first family vacation (to Maui). We rented a condo by the beach in Kihei an enjoyed lots of poke and sunshine. Jackson did not go into the ocean, but he did take a dip in the pool. 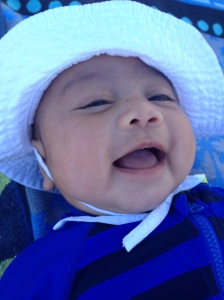 I returned to work. Jackson gets to hang out with his nanny Elizabeth during the day. He loves her and she is teaching him so many things.

Paco and I ventured out on our first date night since Jackson was born. For my birthday, Jackson stayed home with Grandpa while we went to omakase (yum). My birthday present from Paco and Jackson was a professional family photo shoot. It was so much fun, and it is great to have pictures with all three of us in them.

Jackson went on his first road trip, to to Santa Cruz and San Francisco. Also at 6 months, Jackson could sit up on his own (using hands to balance), he could get up on all fours and scoot around (not quite crawling), and he said, “mamamama”! We also introduced him to solids at 6 months. . .he loves mango, oatmeal, green beans, carrots, pears . . . he is natural eater.

His first tooth appeared on his 7-month birthday, which also happened to be Mother’s Day. It was a Mother’s Day miracle!  He can sit up on his own and is getting pretty good at scooting around.

Next month we are taking him to Palm Springs for the weekend. I’m excited for Jackson’s second pool adventure!

Jackson was born on October 10, 2014. The first eight weeks have been so exciting and rewarding, and of course, challenging!

Honestly though, I was expecting life with a newborn to be incredibly difficult (and the first three weeks are still a bit hazy), but Jackson is a very relaxed, sweet, and healthy baby.  I’ve been trying to live by the “fourth trimester” philosophy of not relying on schedules and just letting Jackson eat when he’s hungry, sleep when he’s tired, and so on. It definitely made the first few weeks much easier, although now we can usually figure out what he wants.

Lando and Rascal have adapted to life with Jackson very well. We started preparing them while I was pregnant. Rascal can’t jump onto the couch, so we stopped lifting him onto the couch whenever he wanted. He got used to sitting on the rug by our feet. It is very sweet, actually, he tends to sit by the feet of whomever is holding the baby. Lando has gotten more patient waiting for walks (at least with me), but we are still working to reduce his barking! Luckily Jackson is not terribly disturbed by barking chihuahuas. I’m glad that Lando and Rascal have each other for company, as I am less available to pet and snuggle them. That is just temporary, though!

A few things that have helped me immensely these past few weeks: 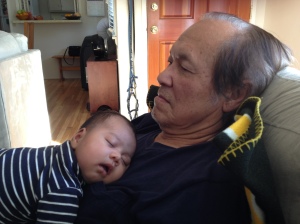 Paco and I are not very focused on interior design. We like things to be comfortable and functional, and most frequently disagree about the amount of “stuff” around (I like less, he likes more). With Baby Flores’s nursery, I think we came to a nice happy medium.  I hope that the little guy likes it when he gets here!

We wanted a boyish room without making it too gender-specific. We did not initially intend to have a theme, but we ended up choosing lots of animal pieces so we sort of have an animal theme going. I love it!

Our main goal was to create a simple, comfortable space for us and the baby to hang out at all hours. Here are a few thoughts on nursery furniture:

Crib – We opted for one with clean lines and plenty of ventilation. If he’s like his mom, he will run warm at night.

Changing table – I wanted to avoid baby-specific furniture as much as possible, so we added a changing pad to our regular dresser.

Glider – I wasn’t sure we’d need one, so I was reluctant to purchase one. However, we inherited this one from Paco’s generous colleague, and I’m so glad that we have it now.  It’s super comfortable with back support and a place to put my feet up.

Night stand with a lamp – I think this will be convenient, especially for middle-of-the-night meals.

With less than a week until my due date, I think we are pretty ready for his arrival!  I can’t wait to meet him.