Our dinner plans for the other night were postponed, so we decided to stay in and open a bottle of wine instead of going out two nights in a row.  After browsing through Anne Burell’s Cook Like a Rockstar, I decided on a modified version of her bucatini all’amatriciana.

I used bacon and linguine because that’s what we had on hand, and the whole point was to not leave the house!  I also had to add garlic and only used one onion (the recipe in her book uses 2 onions for each 28 oz. can of tomatoes). In the picture you can see that I added peas, but honestly they didn’t add much to the sauce, so I didn’t include that in the recipe.

The sauce turned out really well!   Simmering it for an hour really developed the delicious bacon-y flavor.

Coat a deep skillet with olive oil and heat over medium heat. Add the pancetta or bacon, and cook until the meat is crisp and the fat has rendered out. Remove the pancetta or bacon from the pan, and drain on paper towels. Drain off about half the fat if using bacon, which is generally fattier than pancetta.

Add the onion and garlic to the pan and stir to coat in the fat. Season with salt, black pepper, and red pepper flakes. When the onions are soft, add the tomatoes. Pour about a cup of water into the empty tomato can and pour the water into the pan (this rinses out the remaining tomato juice). Add 2/3 of the pancetta or bacon to the pan as well.

Bring the sauce to a boil and simmer, stirring occasionally, for an hour. Taste and reseason, adding more water to thin it if necessary.

Cook the pasta in salted water for a minute less than the instructions on the package. Remove two cups of sauce from the pan and reserve, then add the cooked pasta to the sauce. Allow to simmer in the sauce for a minute or two to finish cooking. 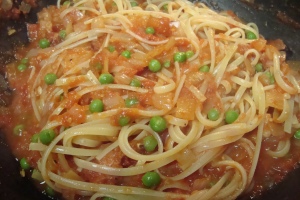 Serve the pasta with some of the extra sauce if necessary.