Paco and I saw this beautiful rainbow chard at the farmers’ market and couldn’t resist. YUM. I was inspired by a couple of recipes, this one from Epicurious and this one from Smitten Kitchen, to combine Swiss chard, bacon, and garlic chips. 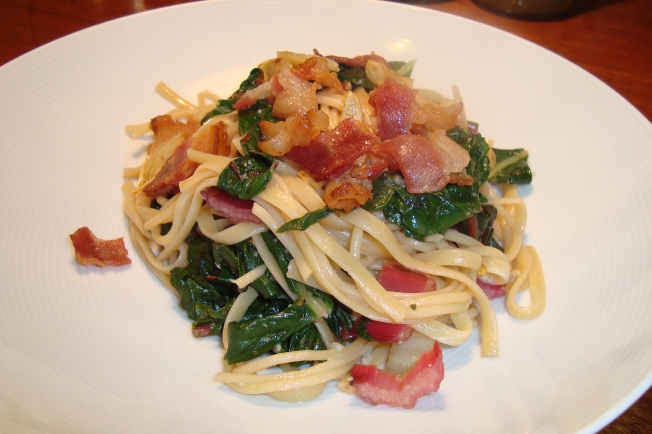 1/2 lb of spaghetti
1 large bunch of Swiss chard, rinsed and cut into 1-inch strips (I use the stems as well, but you can remove them if you’d like)
6 strips of thick-cut bacon, diced
1 T olive oil 8 cloves of garlic, thinly sliced
1/2 tsp red pepper flakes
kosher salt black pepper
1 T balsamic vinegar
1/3 c grated parmesan, plus more for serving

Bring a large pot of salted water to a boil. Begin to prepare the spaghetti according to the package directions, draining when al dente. Before draining the pasta, reserve one cup of the starchy cooking water.

In a large skillet, cook the bacon over medium heat until the fat has rendered out and it is crispy. Remove the bacon and drain over paper towels. Pour the excess fat from the skillet.

Add the olive oil to the skillet, then add the garlic chips. Cook them until they are golden, but make sure to remove them before they burn. Drain them alongside the bacon.

Add more olive oil to the skillet, then add the red pepper flakes. When the red pepper sizzles a little bit, add the chard. Cook until it wilts, seasoning with salt and black pepper. Add the balsamic vinegar and 1/2 cup of the starchy cooking water to the pot, then add the pasta and cheese. Toss together. Add more liquid if necessary. 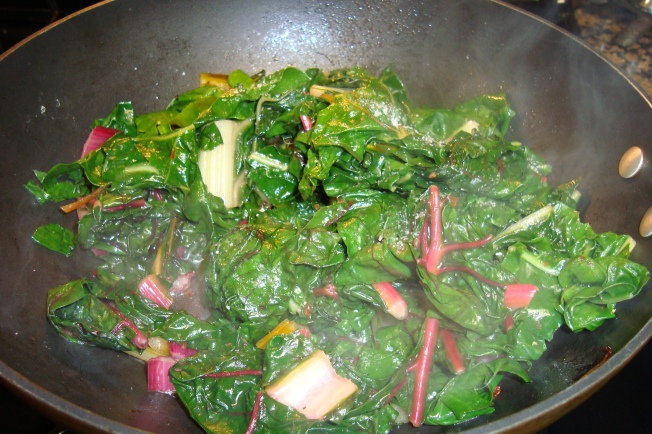 Sprinkle the garlic chips and bacon over the pasta, then serve with additional cheese.